I recently installed Windows 7 in VirtualBox, and unlike other OSes I’ve installed in VirtualBox, the sound driver wasn’t automatically recognized. I found a driver that works with both 32-bit and 64-bit versions.

I just encountered an odd issue with Ubuntu 9.10, Karmic Kaola. I had music playing in the background, I adjusted the volume, and I noticed that there wasn’t any change in the volume level. Even maxing out the volume and muting it had no effect.

After wondering if the problem was that I went insane, I looked in Sound Preferences (right-click the volume icon and select Sound Preferences) and found that “RV635 Audio device [Radeon HD 3600 Series] Digital Stereo (HDMI)” was selected under the device output. This means that Ubuntu was trying to send audio over my HDMI connection rather than through my headphone jacks.

This wasn’t a problem last night, so it might be due to the fact that my external monitor at the office runs over the HDMI connection, so it automatically switched to the HDMI audio output. In one way, this is nice, in another way, it will frustrate me to no end if it does this every time I’m at the office. If I’m right that it automatically switched upon detecting an active HDMI connection, then wouldn’t it be better to make it easier to provide a notification on where to switch the audio output rather than just switching it and causing confusion? 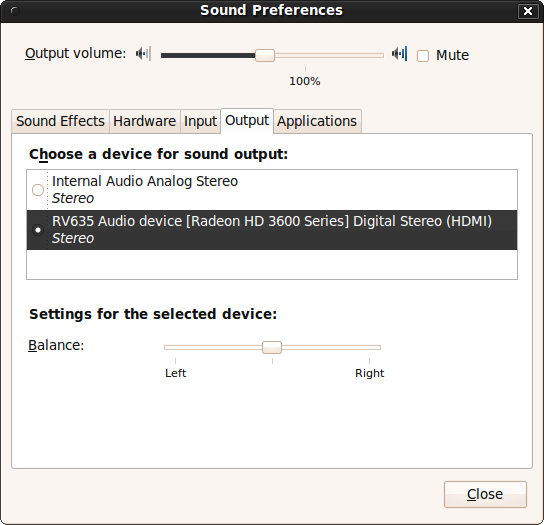 Oddly enough, when I manually selected the HDMI output again, it muted the analog output. So, it seems that it may not be a complete switchover or possibly just a bug. I’ll continue to see how the situation plays out and make a Ubuntu bug report if necessary.

I believe that the free flow of information and ideas is key to the past and future development of mankind. Unless the content declares otherwise, the post content on this site is declared public domain (CC0 1.0 Universal) and can be used in any manner with or without attribution or permission. Of course, if you wish to give attribution back to me, that would be very nice. :)

This site is running WordPress with the iThemes Builder theme by iThemes.